The main focus of our lab is on the biophysics of the voltage-gated sodium channel and how it affects excitable cells. This channel is responsible for generation of action potentials and thus cell excitation. We study the structure and function relation of these channels and how to possibly prevent peripheral pain by their pharmacological modulation using a personalized approach. We use electrophysiology and molecular biological methods, as well as the technology of induced pluripotent stem cells (iPS-cells) and computer simulations.

Human sensory neurons as a cellular model for pain disorders 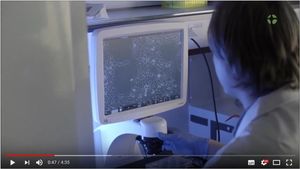 Follow this link to learn more about the stem cell technology applied in our lab.

Painful stimuli are perceived by peripheral sensory neurons. In the laboratory we can study individual human receptors in model systems, which often are very artificial. For example, we overexpress sodium channels and their mutants in sensory neurons of rodents, in order to investigate their effect on cellular excitability.

A substantial improvement of our investigations can be achieved by the use of human cells. This is now possible with the help of the stem cell technology: cells of a patient can be reprogrammed into human induced pluripotent stem cells (iPS-cells). These cells can then be differentiated into human sensory neurons, which contain the specific genetic code of the patient. Thus, it is possible to study the effects e.g. of patient-specific channel mutations directly in their sensory neurons.

We characterize the electrical activity and functionality of these human sensory neurons with the patch clamp technique and with multi-electrode-arrays, the expression of neuronal markers and ion channels by quantitative RT-PCR analysis, immunohistochemistry and calcium imaging. The development of these in vitro techniques opens up new, promising possibilities to explore the pathophysiology of pain disorders, pharmacological testing and thus in the future also the development of better pain killers.

We explore the possibilities to establish personalized models in the lab that could be used to identify effective pain killers. These drugs would specifically and individually help the patients for whom these models were established. In a proof-of-concept study, we have achieved some initial successes: we have been able to identify an effective drug for a patient who has been suffering from chronic neuropathic pain for more than 10 years (Namer et al., 2018, EbioMedicine).

Mutations in the sodium channel can cause pain

The chronic, severe pain syndrome of erythromelalgia as well as PEPD (paroxysmal extreme pain disorder), are rare genetic disorders that are caused by mutations in the voltage-gated sodium channel Nav1.7. Both diseases differ clinically, and also the effects of the mutations on the biophysics of the sodium channel are different in erythromelalgia and PEPD. Nevertheless, it is not clear which changes define the clinical picture.

In several recent studies, we examine the effects of the disease-specific mutations on cellular excitability and how to influence the channel gating e.g. by toxins from tarantulas or spiders. 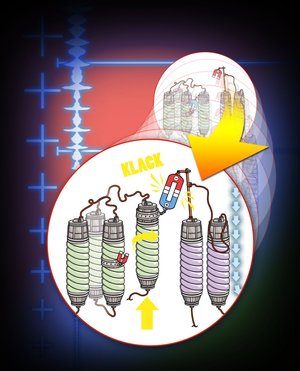 Artistic presentation of sodium channel gating: The voltage gated sodium channel Nav1.7 is expressed in pain sensing neurons. Its mutations are associated with pain syndromes including erythromelalgia. The erythromelalgia mutation Q875E introduces a salt bridge that stabilizes the domain I voltage sensor in the activated position (here, magnets illustrate the salt bridge metaphorically). Thus the Q875E mutation is likely to cause hyperexcitability and pain. This inter-domain interaction is the structural basis for a novel mechanism underlying this pain disorder. For more information on these data please see here and for a more detailed artisitic presenation of our findings please see here.

Mutations in sodium channels can also lead to loss of pain

Recently a mutation in a sodium channel was published which is linked to a phenotype of congenital insensitivity to pain (CIP). Contrary to expectations, electrophysiological investigations in rodent models revealed an increase in channel function. Up to this point such "Gain-of-Function" mutations in Navs were linked to overexcitability and therefore an increase in pain sensation. We intend to better understand these paradoxical findings by using the stem cell technology and electrophysiological characterizations.

Sodium channels are present in almost all tissues in the human body and they are essential for the generation of excitable electrical impulses, such as neuronal action potentials or cardiac pacemaker currents. Mutation or pharmacological modulation of these channels often leads to severe clinical symptoms, such as epilepsy, pain or cardiac arrhythmias. In various current projects, we aim to investigate how drugs, known to induce some of the above symptoms, modulate the different Nav isoforms. This will not only lead to a molecular characterization of the drug’s side effects, but will also allow a safer dosage for some of these currently used and indispensable medications. Ultimately, these results may facilitate the generation of alternative treatment strategies that stay clear of Nav-induced side effects.

Pyrethroids are widely-used pesticides used to control agricultural arthropod pests and disease vectors such as mosquito. These compounds affect the function of insect voltage-gated sodium channels, mostly by slowing of deactivation, thus keeping the channels open. Also it is known that they are also affecting human channels, the distinct effects of pyrethroids on mammalian sodium channels, however, are still largely unkown and have not been as extensively characterized. We study the effect of a classical type-II pyrethroid on the biophysical properties of a human voltage-gated sodium channel and its role in resurgent current induction. 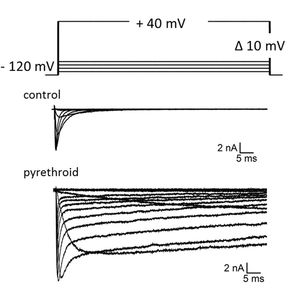 Example current traces showing the effect on sodium channel gating with and without application of a pyrethroid.

Voltage-gated sodium channels are not only modified by changes of the membrane potential but also by mechanical stress. Alterations of the lipid bilayer composition as well as external mechanical influences can lead to significant changes in sodium channel gating. In a current project we investigate factors which affect the mechanical stability of sodium channels to learn more about this phenomenon and its impact on biological systems.

Huntington’s Disease is a genetic autosomal dominant disorder which leads to cell death of a specific cell population in the human striatum. Previous studies showed that the sodium channel beta4 subunit expression is reduced in the striatum of affected patients. Here, we investigate the potential involvement of impaired sodium channel activity in both physiological and HD conditions using heterologous expression systems, mouse models and striatal neurons derived from human induced pluripotent stem cells.